A walkthrough of the "Normal Mileage" system, which is designed to solve the problems associated with actual mileage

AngelTrack has a statistical mileage system that calculates average transport distances between facilities, to assist in checking actual odometer readings and optionally to reduce the impact of odometer mistakes in invoices.

The Difficulty of "Actual Mileage" Contracts

Most EMS contracts specify that actual mileage, rather than book mileage, will be charged. This approach is considered more fair than book mileage, because it compensates EMS for the extra miles so often incurred by road and traffic conditions, by diversions, and by patient requests.

Unfortunately, the use of actual mileage raises these problems:

AngelTrack set out to solve these problems using a statistical system that learns what the normal mileage is for any given route.

When crews perform a transport, AngelTrack prompts them to record their starting and ending odometer readings, in order to calculate the Actual Mileage. The Actual Mileage is always printed in the run report, even though it may be wrong on account of a typographical error in the odometer readings, and even though it may be artificially elongated due to a double-load.

This mileage is not immediately claimed during billing, due to the possibility of typographical errors. First it must be checked and approved by the QA review process.

When it passes QA, the odometer readings are added to the statistical profiles that AngelTrack maintains for each pickup/dropoff point. The mileage and the travel time are rolled into the moving averages that are constantly updated for trips between any two points.

The moving averages are pre-loaded with seed data from Google Maps. They then accumulate additional data from every trip run by EMS.

As the statistical database grows, it begins to inform the billing process. Some transports will run longer (traffic detours, alternate routes, etc.), some will run shorter, sometimes crews type in the wrong odometer readings... all of it is factored in and smoothed over. Over time this moving average will come to accurately reflect the real driving distance between A and B. This moving average -- showing the real driving distance -- is called Normal Mileage. 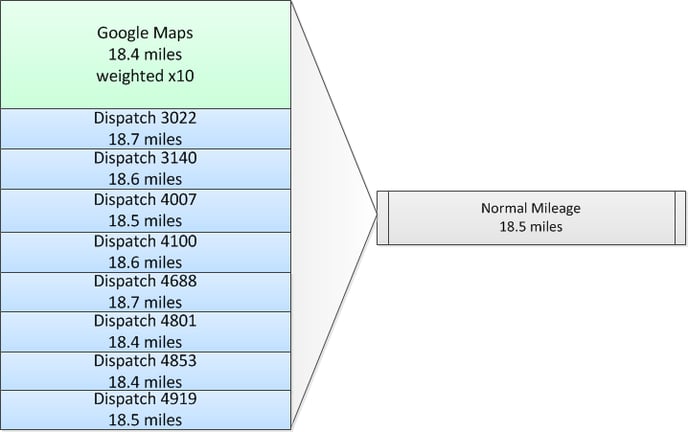 Now suppose a detour occurs, perhaps the extended drive of a double-load. The statistical system irons it out: 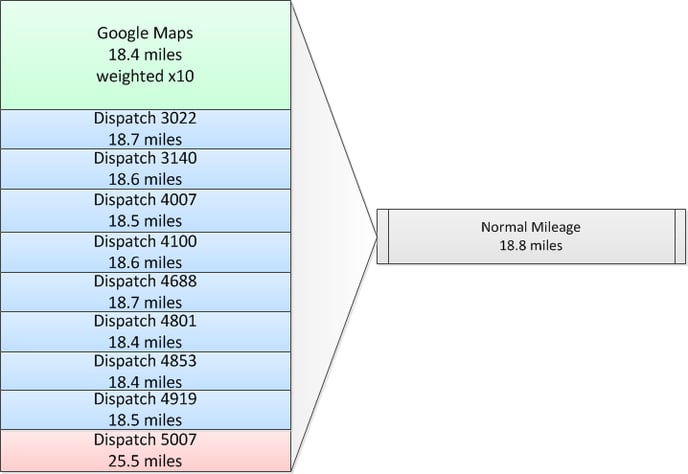 The system protects both EMS and the customer from these mileage excursions... but at the same time, if mileage excursions are the norm (perhaps owing to a permanent detour caused by road construction), then the statistical system will self-adjust, and EMS will be properly compensated for the extra mileage.

You may be asked the question, "What if EMS takes an intentional detour to pad the mileage?"

The Normal Mileage system in AngelTrack protects the patient against occasional detours -- whether appropriate or not -- because the patient will be charged only for the typical mileage for the trip.

The system does not protect against an EMS company that takes unnecessary detours on every trip. This is probably not a significant problem in EMS simply because an EMS service makes most of its money on the pickup, not on the mileage.

Consequently, it is always more profitable for an ambulance to finish a transport quickly and move on to the next pickup. First priority is always finish the transport and get back in service.

Normal Mileage is used many places in AngelTrack...

AngelTrack also allows Dispatchers and Billers to specify a Declared Mileage between any points A and B -- that is, from any facility A to any other facility B. The Declared Mileage represents a final judgment on what the real transport distance is between A and B.

If there is a Declared Mileage for a trip from point A to point B, then it overrides both the Normal Mileage and the Actual Mileage throughout the entire billing process.

To set or clear a Declared Mileage for any given route, open its Dispatch Edit page, switch to the "Billing" tab, and input a number into the "Declared" mileage box. You can also clear (delete) the declared mileage for the route by clearing the box and the saving.

Declared mileage can also be checked, edited, and deleted using the facility record for point A or point B. Visit the Facility List, click the desired facility, select the "Runtimes" tab, and find point B in the list of other facilities (the list contains every point B for which AngelTrack has records of a trip from point A). You can also declare a mileage for the return trip (going back the other direction).

When you specify a Declared Mileage from point A to point B, it automatically trumps any Normal Mileage for the route. It therefore can no longer change according to changing roads and road conditions, and so may eventually become inaccurate -- either in EMS's favor or in the customer's favor. This may be undesirable unless the customer specifically requests a set mileage.

Facility records must be attached as the origin and destination

When using the Invoice Generator to produce invoices, the following sources of mileage data (in descending order of preference) are consulted in order to select the most accurate possible mileage for a transport from A to B:

When invoicing patients for the copay due on an insured call, the Normal Mileage is not used. The amount invoiced is whatever copay is set by the insurance carrier during adjudication.

If you do configure AngelTrack to use Normal Mileage for invoices, it is highly likely that it needs to be in the contract. Consult your legal counsel for more information; this is not legal advice.

Mileage data is stored in the invoices

When an invoice is generated, it captures the best available mileage data for each trip, using the formula shown above. This mileage data is then stored in the invoice, where it does not thereafter change even though the mileage moving averages will continue to evolve and change. In other words, an invoice creates a frozen snapshot of the dynamic mileage data.

The mileage data in the invoice can then be changed by hand (using the Invoice Edit page), along with the prices, but it will not automatically update with newer information from AngelTrack's mileage system.