Using Zones to Divide Up Your Service Area

A complete walkthrough of the Zones system, how to set it up, and what it can do for you

Zones are geographic areas, defined in order to split your call volume up between areas of town, or between stations, or between dispatchers, or between franchises in your conglomerate. You can create simple or complex zones in order to express how your organization divides up responsibilities and traffic. For example, you could have 'East' and 'West' zones, and maybe a 'Downtown' zone, or divide the town into a quadrant.

Zones do not affect billing

Zones are for the benefit of dispatchers. They do not affect the billing process.

AngelTrack is built on the assumption that you have one billing office for your entire operation, regardless of how many dispatch centers or dispatchers there are. Thus, AngelTrack's billing workflow is always a global view of your receivables -- without regard for your zones.

There are many billing reports to filter your revenue data by originating zone, so that you can analyze the income of each zone separately... but the workflow itself is zone agnostic.

Zones do not affect uploads to your state trauma registry(s)

AngelTrack automatically validates and uploads run reports to the relevant state trauma registries, based on each dispatch's origin state, and is unaffected by your zone designations. To learn more, read the State Trauma Registry Uploads Guide.

Use the Zones page to add a new Zone. Open the Zone Add page by tapping the

symbol to the top-right of the table. The Zone Add page provides a live map for use in choosing lines of latitude and longitude to mark out the zone. Every zone can have one, two, three, or four geographic restrictions, as laid-out in the below examples.

The built-in "Global" zone has no bounds, and therefore always contains all street addresses -- regardless of whichever other zone they belong to. In the many places in AngelTrack where you can select a zone to view, selecting "Global" always shows all data.

To divide a city in half, into a West zone and an East zone, do something like this: 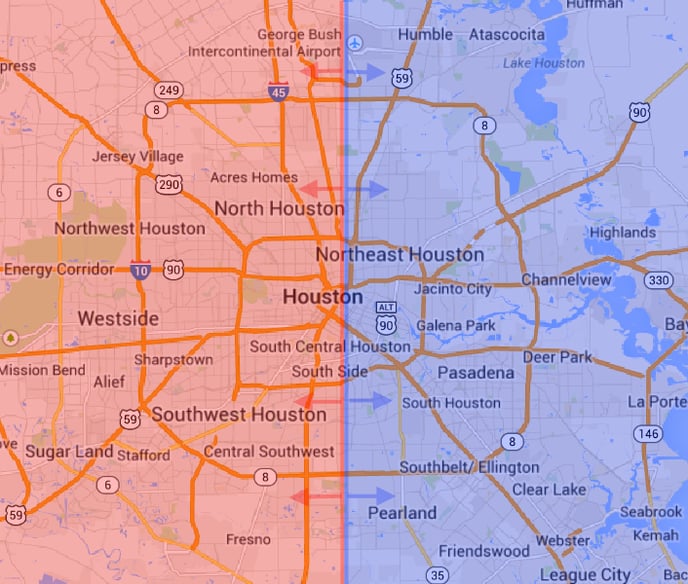 A simple north/south split is done the same way.

A three-way split can be used to divide the load between two busy areas and one large quiet area, like this:

A four-way split can be used to divide an area into quarters, like this: 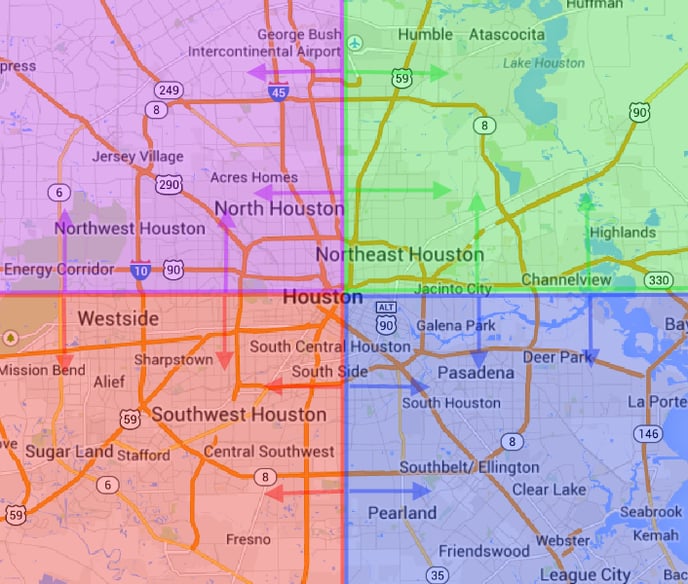 A metropolitan area can be split five ways so as to reflect call volume, like this: 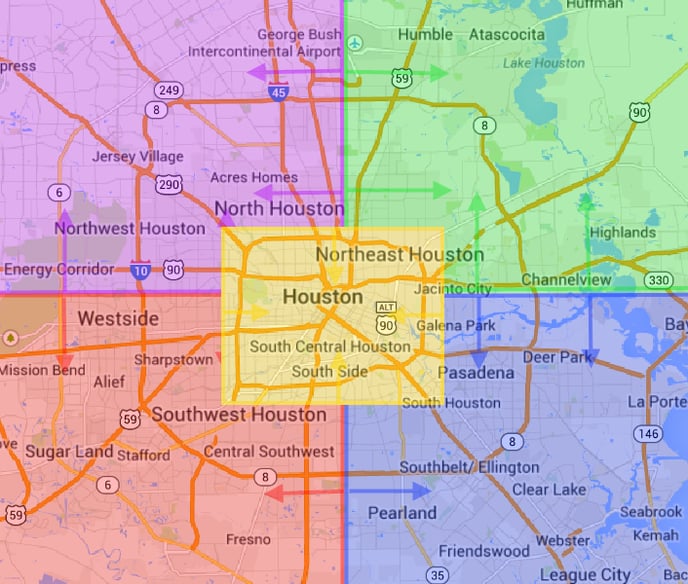 If a street address falls inside two or more zones, AngelTrack uses the following logic to decide which zone it belongs to:

You can take advantage of this when you serve a very large city that has hotspots requiring special attention. Each hotspot becomes a small zone nested within the larger zone of the city: 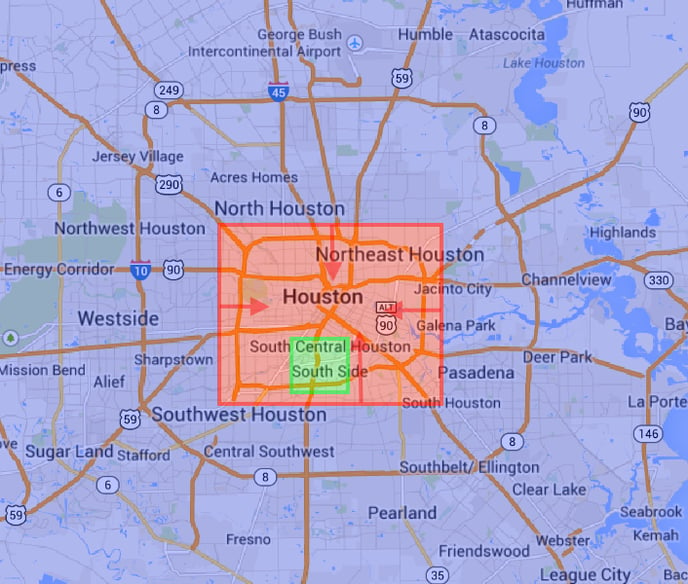 The trick here is to stop using the Global zone, because it can always see everything happening in all zones. Instead, create two zones like this: 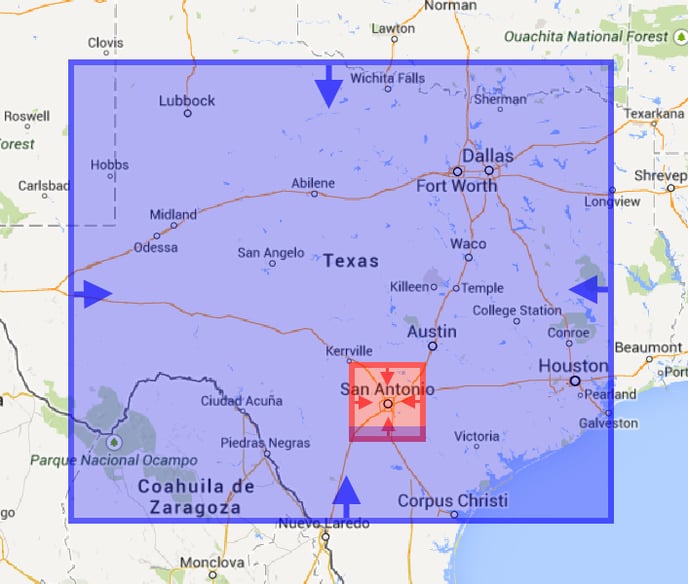 In this example, we create the "Headquarters" zone covering the entire state so that the dispatchers at headquarters can see everything except the San Antonio calls. This works because of the "smallest zone wins" rule: when zones overlap or are nested, such that a dispatch falls inside multiple zones, the smallest zone wins the dispatch. Thus, in the example above, a pickup in San Antonio belongs to the "San Antonio" zone, even though that pickup also falls within the "Headquarters" zone.

Your dispatches and supervisors can still switch to the Global zone if they want to see everything including the remote office's territory.

If you have operations in several cities, each city can be a zone, like this:

In addition, you can create nested zones inside each city zone as needed.

Zones Must Always Be Rectangles

AngelTrack supports only rectangular zones. This is done to simplify and accelerate the back-end database processing.

Many areas of AngelTrack are zone-aware, offering a zone-selector control in the upper-right corner of the page. An employee selects his or her zone of responsibility, and AngelTrack then hides everything outside of that zone (dispatches, vehicles, and so on). In this way, employees assigned to one division or station need not wade through other divisions' and stations' data. The employee's zone selection persists throughout AngelTrack until changed.

If you use a complex zone set to handle your daytime workload, but require a simpler zone set at night, it is easy to arrange. Define your daytime zone set as normal, and define a nighttime zone set too (there can be overlap between the sets). When night falls, visit the Zones list and click the Active status buttons to deactivate the daytime zones, and reactivate any inactive nighttime zones. In the morning, do the reverse. Activating and deactivating a Zone has no ill effects and causes no other changes to your database.

If and when you cease using a zone, mark the zone record inactive. Try not to reuse the record for a different zone, or delete any information from it; the information should remain permanently in the zone's inactive record for future reference.

The "Recently in Zone" Field

Many grids in AngelTrack -- including Employees and Shifts -- include a "Recently in Zone" field. This field shows the zone that the respective employee was in when he or she last reported a GPS position.

Employees report their GPS positions automatically when using any of AngelTrack's crew pages (pages with black backgrounds)... provided their mobile device has GPS capabilities, and provided the employee has permitted it to report its position when AngelTrack requests it. For further reading, read the GPS Tracking of Crews guide.

The "Recently in Zone" field is reported when the employee's GPS position is less than 2 hours old. This time limit is different than the Live Map, which shows GPS pins for positions no more than 10 minutes old.