In AngelTrack every dispatch has two key datafields that are set when the dispatch is completed or cancelled:

These two datafields summarize what happened during the run. They therefore control how the dispatch will be billed and how it will move through AngelTrack's postprocess workflow.

Once set, we strongly recommend never changing these fields unless found to be incorrect.

The Execution Status datafield is set by the dispatcher when a run is completed or cancelled. It has four possible values:

Keep in mind that other datafields also play a role in determining how a dispatch moves through postprocess. For example, if ☑ Billable is unchecked, then the dispatch will always go straight from QA to Finished, since AngelTrack believes there is no money to be collected. To learn about all the fields that contribute to the postprocess workflow, read the Postprocess Workflow guide.

The Execution Status field can be changed at any point in the postprocess workflow, and AngelTrack will then attempt to place the dispatch at the appropriate spot in the workflow. For example, if a cancelled dispatch is changed to "best effort", AngelTrack will move the dispatch back to the crew to get their run report, followed by QA as usual.

After call completion, AngelTrack will auto-set the "Transport Disposition" datafield. That datafield is part of the Followup, and AngelTrack auto-sets it using PCR data. The crew is then free to modify the datafield as necessary, and is responsible for ultimately determining whether or not AngelTrack's auto-set field is correct.

"Transport Disposition" controls the PCR data requirement that AngelTrack imposes on the crew, and which your state trauma registry imposes (via their data validation rules) on AngelTrack. Therefore it is a crucial field.

Possible values for the "Transport Disposition" datafield are listed in the table in the next section.

If transport was expected (i.e. if a dispatcher has specified a destination name or street address in the run ticket), then it is possible for the "Execution Status" datafield (set by the dispatcher) to conflict with the "Transport Disposition" datafield (set by the crew). For example, if the dispatcher closes a dispatch as "Complete, as ordered", but the crew sets the transport disposition to "Patient refused transport", then the fields are in conflict.

Remember, the purpose of "Completed, best effort" in AngelTrack is to warn the billing department that something about the dispatch is unusual or incomplete.

The following chart shows all non-conflicting combinations of the "Transport Disposition" and "Execution Status" fields, for any dispatch where transport was expected:

Any combination not shown in the table is a conflict. The crew will be prompted to resolve it.

The Crew Resolves the Conflict

When such a conflict occurs, AngelTrack will ask the crew member to resolve it.

AngelTrack will ask right after a crew member saves any changes to the dispatch's followup data. The crew will be shown a page that explains the conflict and asks how it should be resolved:

What the page is really asking is: which field -- be it Execution Status or Transport Disposition -- is incorrect? After the crew member answers, AngelTrack will make the necessary adjustments in its database, and the postprocess workflow will proceed normally.

The aforementioned datafields can be edited at any time, if found to be incorrect.

Both of them are available for editing in the Dispatch Followup page, as well as the "Billing" tab of the Dispatch Edit page.

QA Reviewers have the ability to edit the Transport Disposition, but not the Execution Status, on the QA Review form.

Why Can't I Reopen a Closed Dispatch?

This restriction was a conscious design decision in AngelTrack.

Because so much happens to a dispatch in postprocess -- report completion, QA, insurance review, billing, invoicing -- AngelTrack is built on the assumption that you cannot reopen dispatches once closed. Every AngelTrack user must operate on the core assumption that "Once it's closed, it stays closed".

You can visit Dispatch Followup and change the execution status of a closed call, from "cancelled" to "completed" to "delegated"... but that change has serious billing implications, so make sure you understand the impact before doing so.

You can also cancel and then dupe a closed dispatch, if you must re-run it. The original dispatch will thereafter reflect its own history up to the point of cancellation, and then the new dispatch will start from there.

If you wish to un-cancel a dispatch and instead mark it completed or delegated, you can do so by assigning it to the shift or affiliate that ran it.

To do this, first open the call's Dispatch Edit page. (In order to find the dispatch in the Closed Dispatches list, you must unhide cancelled calls.) With the run ticket open, click the "Assigned To" link: 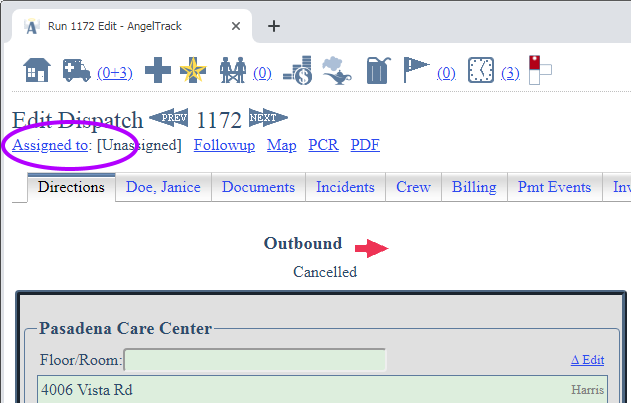 AngelTrack will open the Dispatch Assignment page, and show you the shifts that were on-duty at the time the dispatch activated, as well as the affiliates that were open for business at that time. Select whichever one ran the call.

Afterward, the associated crew will see the trip in their list of incomplete reports. The call will be marked "Complete, as ordered", but you can change that in Followup.