An Explanation of Electronic Data Interchange in AngelTrack's Billing System

A complete walkthrough of what EDI is, how it relates to EMS Billing, and how AngelTrack uses it

This primer will teach you all about Electronic Data Interchange, or "EDI" for short.

EDI is the passing of insurance billing information back and forth between you, your clearinghouse, and the insurance carriers... all done electronically. It replaces the paper CMS-1500 forms used in the past.

The electronic messages passing back and forth are carefully formatted according to certain national standards.

It's easier to follow the terminology if you visualize it:

Unfortunately, when reading about EDI, you will encounter all of the following different terms for this same concept:

AngelTrack and its documentation use the simple term "X12" to refer to all of the aforementioned. For example, AngelTrack might ask you to upload "an X12.835 document", referring to the electronic EOB format.

When two computers talk to each other about healthcare billing, there are standard requests they can make of each other. Both the 4010 and the 5010 versions lay out exactly how these requests and replies are formatted. The formats are numbered like this:

You may have heard of the 997 format. It was replaced by the 999 format in the 5010 version (standardized in 2012). All other formats kept the same ID numbers but gained many new fields and features.

It is very unlikely that you will find a 997 file today; everyone is using 999 now. AngelTrack's EDI importer supports both 997 and 999.

How a Claim is Filed and Paid

Now that you are familiar with the different messages and the formats used to encode them, let's look at the process of filing a claim and getting paid:

Step one: batch and upload

Claims are encoded by your billing software into an 837P batch. You send the 837P batch to your clearinghouse. The clearinghouse checks the batch for any obvious errors, then sends back a 999 to say that the batch was accepted or rejected. If the batch is rejected, the reasons for rejection are given in the 999.

The batch can contain claims for multiple carriers; your clearinghouse will divide up the batch appropriately. Of course, you cannot do this if you do not use a clearinghouse: if you send EDI claims directly to a certain carrier, then obviously your claim batches must contain only claims for that particular carrier.

*Payor IDs are explained in detail below, near the bottom of this primer. 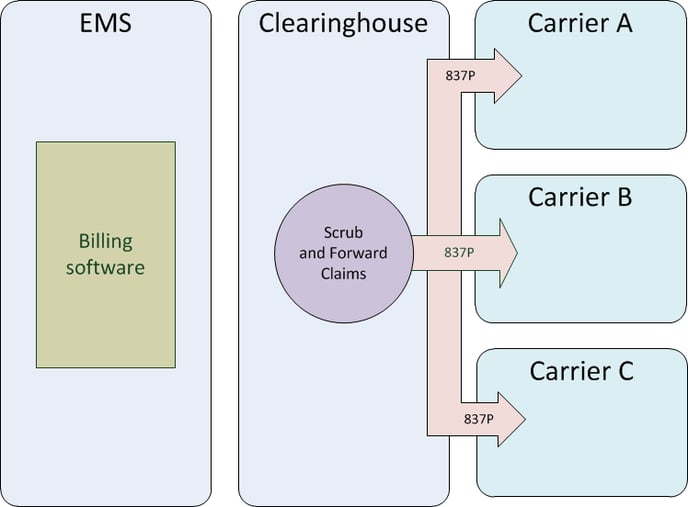 Each carrier validates the incoming batch of claims, checking patient IDs and patient names and coverage. Some claims will be accepted for adjudication, others will be rejected. The carrier then sends back a 277CA, which is a list of acceptances and rejections, along with reasons for rejection. The clearinghouse receives the 277CAs and forwards them back to you.

If there were any rejections, then you must correct the claims, batch them up into another 837P, and repeat the process.

During adjudication, the carriers decide which claims will be approved and which will be denied. Allowed prices are also calculated. The results are sent back to the clearinghouse, which collects and forwards them to you. 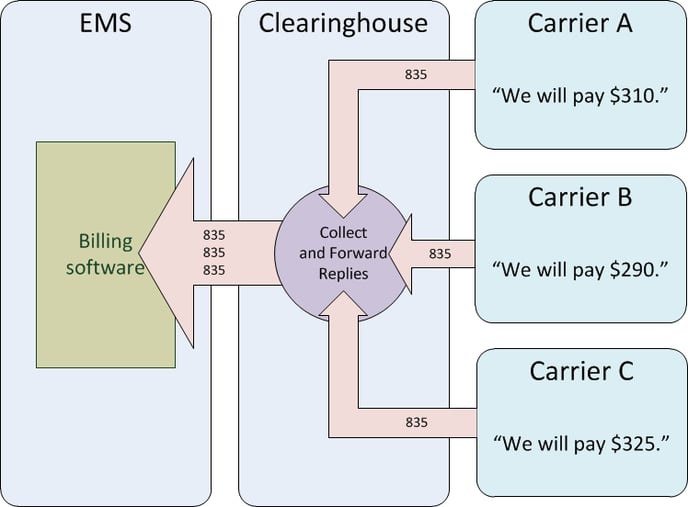 If any monies were paid for the approved claims, the details about check numbers or wire transfers are included in the 835 files. Your billing software will decode everything in the 835s and then calculate any balances still owed by the patients.

Because adjudication can take days or weeks, the 835 files you receive will not exactly match up with the 837P batches you sent earlier. An 835 simply contains whatever claims completed adjudication on that day. Therefore your billing software must match everything up using the claim control numbers.

The claim control numbers are carefully preserved by the clearinghouse and by the carriers. They are included in the 277CA replies and in the 835 replies in order to identify the claims in question. Your billing software depends on this in order to match up approvals, denials, and payments with the claims it sent earlier.

The claim control number is reported in 835 field CLP01.

In addition to the all-important claim control numbers, there are also control numbers for 837P batches, for patients, and for the individual service lines in a claim. However, as a biller you probably will not ever deal with these other control numbers; they will be handled by your billing software.

Although the carriers are responsible for remembering and returning the claim control numbers emitted by your billing software, they also assign each claim their own control number for tracking purposes.

The carriers do this because they cannot depend on all their providers to always send in a unique claim control number: it is easy to imagine three different ambulance companies all coincidentally sending in a claim numbered DOE20160311.

The unique control number issued by the carrier is called the payor control number, and it is returned in the 835 alongside the claim control number that your billing software issued. You will always receive both. If you ever need to contact the carrier about a claim, you will need one or the other to help them look up your claim. 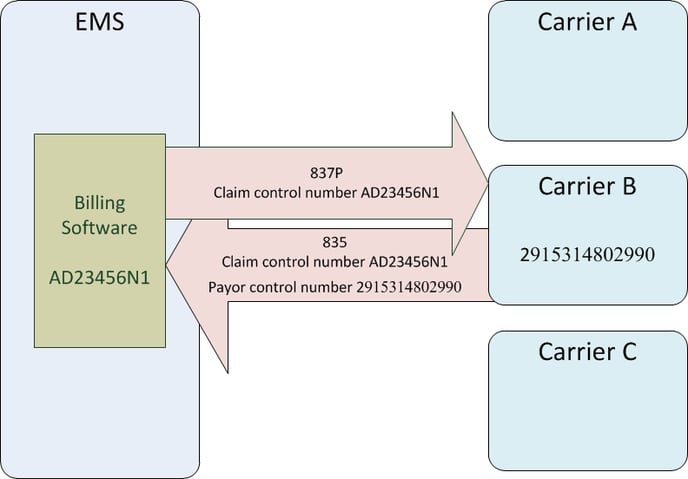 The payor control number is reported in 835 field CLP07. It is sometimes called the "reference identifier".

When 277CA documents are returned, they contain a payor control number in loop REF*1K. AngelTrack will display this when you view the "Claim" payment event after the 277CA has been imported: 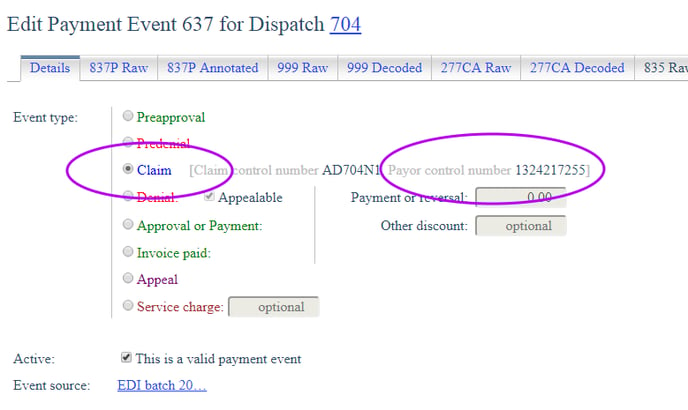 This number was generated by the carrier when the claim was accepted for adjudication, and you might need it if you contact the carrier about the claim.

How Do EDI Files Get to the Clearinghouse?

Some billing software is partnered with a specific clearinghouse, and so the software has built-in upload and download capability for that clearinghouse. You click a button, and the software sends and receives all pending EDI files. The transfer is securely conducted over the SFTP protocol, or sometimes FTPS.

AngelTrack supports all clearinghouses, and its uploader/downloader supports any clearinghouse that has supports SFTP protocol. You may choose not to use it, and instead, AngelTrack will prepare all outgoing EDI files for you, and you upload them using any ordinary SFTP program. Your SFTP program can probably create a drag-and-drop folder on your desktop to make this very easy. AngelTrack's Insurance Transmission Queue organizes all of your claim batches and shows you which ones are waiting and which ones are done.

After uploading, you will pull down any new EDI files waiting for you at the clearinghouse, and then feed them into AngelTrack's Import an EDI Document page. The page automatically figures out what type of EDI file it is, and processes everything while you watch.

Once you've acquainted yourself with your SFTP file transfer program, the task is simple and quick.

Is It Mandatory to Use a Clearinghouse?

No. You can send EDI or paper claims directly to an insurance carrier.

But it's a lot of work. Every carrier is different. You'd need to learn, develop, and test an upload/download process for every single carrier. And you'd have to learn the nuances of each carrier's interpretation of the X12 specifications in order to custom tailor your EDI claim documents to match.

We strongly recommend letting the clearinghouse worry about those details. That way you only have to manage one EDI transfer process. The clearinghouse will "scrub" your claims so that they will be exactly compatible with the receiving carrier.

What Are Payor IDs?

The five-character IDs are assigned by the clearinghouse. Therefore every clearinghouse can have a different payor ID for a particular carrier. There is no standard national list that all clearinghouses are required to use.

When you prepare a claim, one of the things you must specify is the payor ID of the liable carrier. Your billing software will have onboard a copy of your clearinghouse's payor ID list, and it will let you look them up by name. For example, you might search "Aetna" to see all payor IDs for all Aetna subsidiaries in order to find the one that matches the patient's insurance card.

Good billing software -- including AngelTrack -- will remember the payor IDs you looked up for each patient so that you do not have to look them up again each time you file a claim. However, if you ever switch to a different clearinghouse, you must look them all up again.

Most carriers and clearinghouses publish a "Companion Guide" online, explaining their specific requirements for EDI files sent to them. If your claims are being rejected and you don't understand why read the carrier's companion guide to see if they have any unusual requirements.

Your 837P documents -- which, remember, are your batches of claims -- can be flagged "test mode" in order to check your processes without any financial repercussions. The clearinghouse will accept and validate the documents and (ideally) provide you a 999 response without forwarding anything to the carriers.

If you'd like to do this using AngelTrack, visit the Settings page under Preferences. You'll find the Test/Production switch among the clearinghouse settings.

It is a standard form for submitting claims on paper, the old-fashioned way. As its name implies, the CMS-1500 standard is authored and maintained by CMS -- the Centers for Medicare & Medicaid Services. 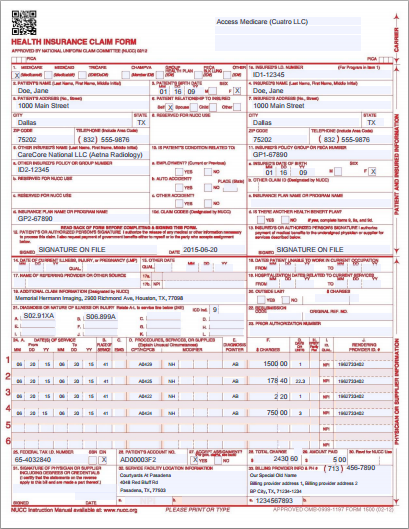 You cannot print your own blank CMS-1500 forms; you must buy them pre-printed. Nor can you fill them out by hand; your software must fill them out by printing text onto just the right areas of the page so as to line up with the boxes on the preprinted form as it moves through your printer.

AngelTrack can fill out your 1500 forms for you in this manner. However, you should avoid using paper claims because they are rejected more often than electronic claims.

Incidentally, there is a special document called an "837P Crosswalk" that shows how each numbered box on the CMS-1500 maps to the data elements of the 837P format.

That's a lot of information to absorb. It may be beneficial to read this primer again tomorrow.

The next thing to learn is coding, where you choose the elements of a claim: medical diagnosis codes, modifiers, alphanumeric codes for services rendered, and so on. Read the Coding guide to learn more.