In AngelTrack you can save the addresses of frequently visited locations, for later reuse. These saved addresses are called "facilities", or "facility records". They are a convenient way to store a lot of information about the places you often go.

Facility records used all over in AngelTrack: in dispatch, in the PCR, in billing, and in the many supervisory reports.

Remember that any location can be a facility: a nursing home, a hospital, a patient's home, a group activity center, any place that you pick up from or transport to. 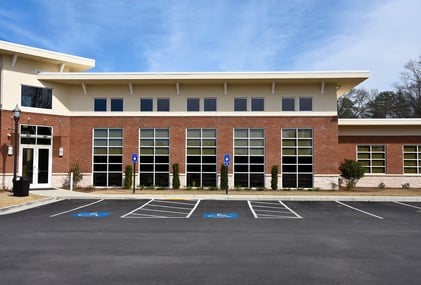 Once your common pickup locations are input as facility records, call-taking is much faster:

The dispatcher can quickly search the list of recorded facilities, instead of typing in the street address and phone number again and again. If no matching facility record is found, one can be created by just clicking the button.

If you have one particular facility who originates a majority of your calls, you can flag that facility as ☑ Default A (your most-common pickup location) or ☑ Default B (your second-most-common). Thereafter, dispatchers will get a

icon which will quickly create a new dispatch record with the facility already set as the origin.

Once you create facility records in AngelTrack for the establishments you often serve, you can record the details of your service contract, including prices charged and services offered. 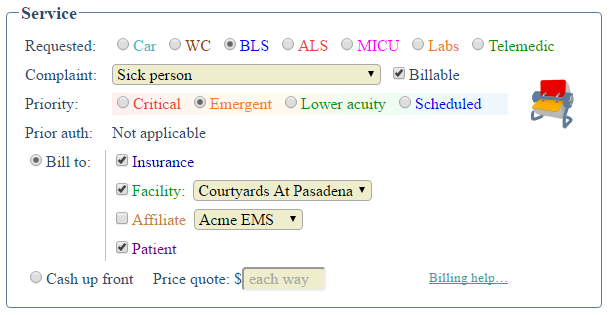 AngelTrack can set up the billing automatically, using your facility records

For example, suppose you record your stretcher/wheelchair contract with East Nursing Home. Next time a dispatcher books a stretcher call with that origin, AngelTrack will automatically select ☑ Bill insurance, ☑ Bill facility, and ☑ Bill patient. These settings will then guide the completed dispatch through billing after it passes QA: first to insurance review, then to insurance filing (if applicable), then to facility invoicing (if denied) or patient invoicing (if approved with copay due). Wheelchair calls, likewise, will be automatically set ☑ Bill facility, and will therefore automatically go to facility invoicing after passing QA.

We want to take a moment to highlight this point once again. AngelTrack's workflow automation is driven by the bill-to settings. When they are set correctly, AngelTrack is able to automate a large portion of the workload on the billing office, along with the number of opportunities for error.

Other Benefits of Facility Records

So, if you are frequently dropping off or picking up at a certain address, you should designate that address as a facility in AngelTrack... even if the address is just a residential home.

at the upper-right corner. Fill in all the information you have; leave the rest blank.

Dispatchers can also create new facility records on-the-fly while call-taking; the Dispatch Create and Dispatch Edit pages both have buttons to automatically transform an address into a facility record and then attach it to the dispatch.

If you have a contract with a facility, or if you regularly bill the facility directly for services rendered to its patients, then tell AngelTrack about it. AngelTrack can then automatically set the billing fields when new dispatches are booked to and from that facility.

In the Facility Edit page there are checkboxes to describe your contract with the facility:

Once that's done, visit the "Billing" tab and type in the prices and benefits specified by the contract. These prices will then be used when dispatchers give price quotes over the phone, and when generating invoices: 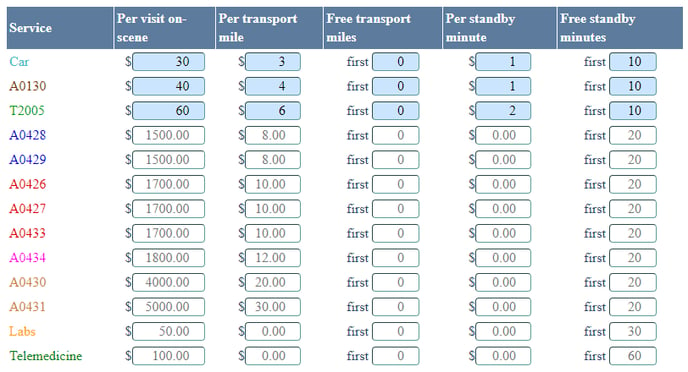 To learn more about configuring and using contract pricing in AngelTrack, read the Contract Pricing guide.

Over time AngelTrack will accumulate duplicate facility records, as well-meaning dispatchers accidentally create a second record for a facility which they could not find while searching. Here is what a duplicate record looks like:

When you see these from time to time, take a moment to merge them together:

The merge operation cannot be undone, so double-check each merge before consummating.

Merging a facility that uses the Customer Portal

The facility ID numbers are placed in field "eDisposition.02" in the NEMSIS data format, uploaded to your state, and is referred to as the "Destination Transferred To - Code" or the "Destination Facility Code" during state data validation.

If your state is particularly well-organized, they will publish their official list of medical facilities, along with their trauma registry numbers, in electronic format on the NEMSIS website. AngelTrack's Facility List Importer can import it directly from there, saving you the hassle of manually typing in all those numbers.

Importing from the NEMSIS repository

When you open the Facilities List Importer, it will be preloaded with the necessary URL. However, NEMSIS might change those URLs at any time, so if the URL doesn't work, then browse to the repository and find the correct URL to the raw XML of your state's "State Data Set".

AngelTrack will download it and digest the data. It merges the list with your current facility list by looking at the state facility codes. If a record in the state's list specifies a facility code that does not yet exist in your facility lst, it will add a new record for it. This may create some duplicate records, which you must manually de-duplicate.

Also note that state facility lists sometimes contain duplicate records, typos, generic records with no street address, and rows with missing data. AngelTrack will do its best to import whatever it can; you can review the results shown in the results table to see what couldn't be imported.

AngelTrack can also import from a .CSV ("Comma-Separated Values") file.

If your file is in Microsoft Excel™ format, use Excel to convert it to .CSV by selecting the "Save As..." feature. If there are multiple worksheets in the Excel workbook, then each worksheet must be individually saved as a .CSV and then imported separately.

If you wish to use Microsoft Excel to groom or update or merge your facility list, you can easily export it from AngelTrack's Facility List by clicking the

button. AngelTrack will download the facility list to you in .CSV format, readable by Excel, by Google Sheets™, and by all manner of other applications.

When you are finished, re-import the list back into AngelTrack by clicking the

button. AngelTrack can re-import its own exported facility list, with perfect fidelity, so long as you do not disturb the first 15 column names on the header row. These column names are listed just above, in the "Importing" section.